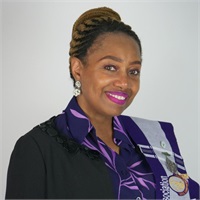 She has worked on a wide range of issues including child trafficking, girls education, peace building, and violence prevention with the African Union, DFID, ECOWAS, UNICEF, the World Bank and others.

Eleanor oversaw the women, peace and security networks that conducted advocacy on the Nigerian National Action plan on women, peace and security, including special initiatives around widows and persons with disabilities in conflict-prone environments. She also facilitated support for passage of the Violence Against Persons Prohibition act in Nigeria and led a team of experts to draft a Regional Strategy for Stabilisation, Recovery and Resilience for countries affected by Boko Haram.

She is the Immediate past Sub-Saharan Africa Regional Chair of the United Nations NGO/DPI Executive Committee. From 2009 - 2017, Dr. Nwadinobi has been a United Nations Commission on the Status of Women (CSW) Keynote Speaker, Panellist and Delegate. In 2013, she was honoured in New York at the CSW by Nation to Nation networking with an award of merit.

She sits on the Board of several International and National Organisations, and has made numerous conference and workshop presentations.

Founding Zonal Coordinator of a Coalition on Violence Against Women (CEVAW)
Founding Director of The Tabitha Infirmary Foundation
Co-Founder Blossoms of the Vine fellowship
Founding President, King's Daughters society of the Anglican Communion
Lady of Knights of the Good Shepherd, Church of Nigeria , Anglican Communion.

She is an author and contributor to several publications. Her personal profile is featured in Friedrich Ebert Stiftung publication titled “The hands that build Nigeria: Nigerian women role models”.

A recipient of several awards, her hobbies include writing, reading, swimming and traveling.

Eleanor is Trustee of Blossoms of the Vine Fellowship, president of Widows Development Organisation and president-elect of the Medical Women’s International Association, a global association for women physicians. Eleanor joined the Every Woman Treaty Working Group in 2016 and is Founding Co-chair of Steering Committee.